How to be a Professional Salesperson.©
Free Sales Training Video Series – Don’t end up like Wally Pipp

Most people don’t know who Wally Pipp was.  However, most people, and just about every baseball fan, have heard of Lou Gehrig.

In 1925, Wally Pipp was the first baseman for the New York Yankees.  As the legend goes, Wally Pipp had a headache that day.  “I can’t play today Hug”, Wally told the Yankees manager, Walter Huggins.  Huggins put in a rookie named Lou Gehrig.  Gehrig didn’t come out of the starting lineup for another 2,130 games and became the Iron Man of baseball.

Ever feel like calling in sick because you just don’t have your “A-game?”
Think you have enough deals in your pipeline?
No need to sweat making a few more calls because you have the sales contest locked up?

If so, remember Wally Pipp.  Given hindsight, do you think Wally would have toughed out one more game? 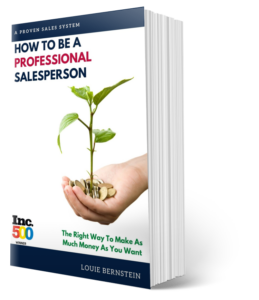 To order my complete sales system from Amazon, just click the book.